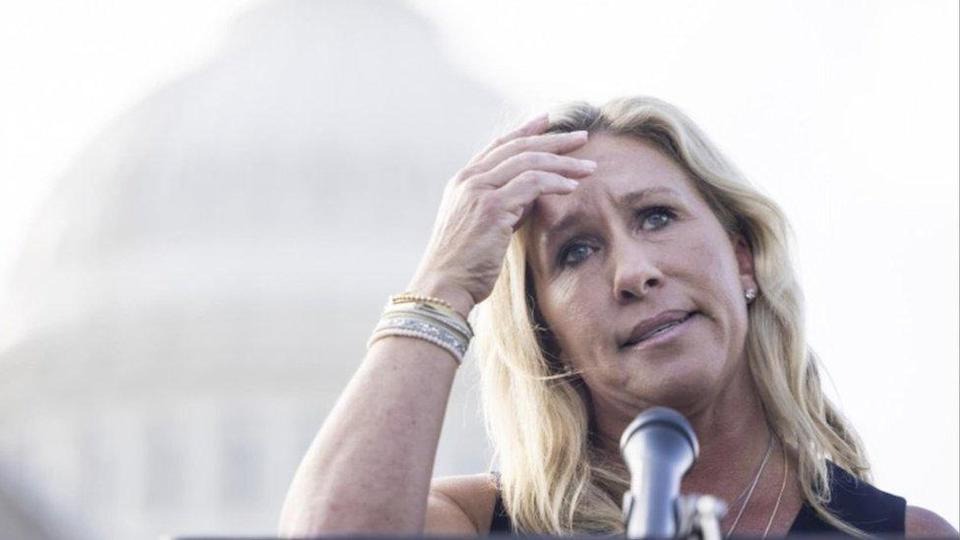 Following Ukrainian President Zelensky’s virtual speech before Congress, a claim has been doing the rounds among some Democratic supporters that Marjorie Taylor Greene, the rightist Republican, refused to show her appreciation for Zelensky.

This claim was shared countless times and established on a short video clip taken from footage of events at Congress. The claim that went viral showed members applauding vigorously while Marjorie Taylor Greene appeared less enthusiastic and at one time bent to pick up her phone at to peek briefly at it.

A tweeter said that while Zelensky is greeted with vigorous enthusiasm by other Congress members, Marjorie Taylor Greene appeared to be less enthusiastic in her greetings. At one stage she is seen bending for her cell phone, then looking at it.

The liberal political action committee, MeidasTouch tweeted that in the clip as the Ukrainian President Zelensky is greeted with a standing applause, Marjorie Taylor Greene appears to refuse to clap and instead is seen grabbing her phone.

The footage in the media grab is only 4 seconds long and does not show the complete story.

A fact check has revealed that Marjorie Taylor Greene did applaud Zelensky. The complete footage shows that she stood and clapped on 4 different occasions both before and post Zelensky’s speech.

On the first event, Taylor Greene is seen applauding for about 3 seconds as the Ukrainian President appears on the screen. Greene stopped clapping around 6 seconds before the viral footage began showing her. She then used her phone to take pictures of other members applauding, something other members did seconds later.

Marjorie Taylor Greene applauded once after Nancy Pelosi greeted the company of the ambassador of Ukraine. She applauded a third time after Pelosi presented Zelensky and uttered the words ‘Slava Ukraini,’ meaning ‘glory to Ukraine.’

Finally, she applauded for over 15 seconds after the conclusion of Zelensky’s speech.

But critics have said that what Marjorie Taylor Greene did was not clapping but a short ‘smush’ of the hands. She has termed the accusation of her refusal as misinformation and propaganda.